Supporting Ireland all the Way!

Some of Ireland’s biggest football fans got a special surprise when they were recently joined by Republic of Ireland Manager Stephen Kenny for an exclusive zoom Q&A on all things football.

Kenny received a warm welcome from St. Michael's House Football Fan Club who were delighted with the opportunity to ask Stephen some questions and to chat about all things Irish football. Based in Dublin, St. Michael's House provides a range of services and supports to men, women, and children with intellectual disabilities and their families across the greater Dublin area including both residential and independent living supports. The Football Fan Club was established in 2020 as part of the organisation’s online Activity Hub. The Hub hosts educational and social events that help keep service users connected during these distanced times.  These football fanatics come together weekly to help keep and enjoy their shared interest. 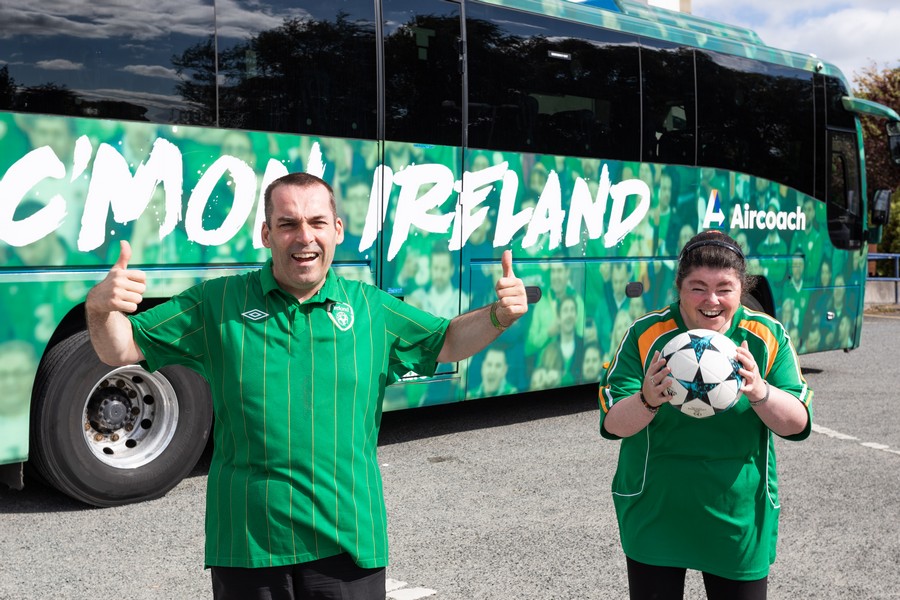 The special Q&A was brought together by St. Michael's House charity partner Aircoach, who is also the Official Transport Provider to the Republic of Ireland’s senior men and women’s teams. Speaking about the event, Dervla McKay, Managing Director of Aircoach said, “When we heard about St. Michael's House Football Fan Club, we knew we could do something special for their members and with the support of the FAI, we were delighted to help create this exciting Q&A and the opportunity for members to chat with Stephen Kenny.”

Following the event, Jacqui McDonnell, Acting Head of Communications & Fundraising at St. Michael’s House said, “We are extremely thankful to Aircoach, the FAI and of course, Stephen Kenny for making this event possible for our Football Fan Club. Our members were thrilled with the opportunity to ask Stephen their questions and to chat with him about his journey to football and now as Manager of the Republic of Ireland. Stephen also very kindly invited our members to Ireland’s next home fixture in the Aviva Stadium which there is huge excitement about. They will be shouting even louder for Ireland on October 12th!

What our customers say

Overall good. But sometimes it's very busy and if you've booked online at specific time and the seats are full then your ticket i...

To say Ann-Marie in Customer help is amazing is an understatement. She made my day and helped me out by going above and beyond, she deserves...

Got in touch with customer service ref a change to a flexi booking. Really quick response with accurate advice and guidance. Definitely reco...

Was very happy with the service, polite, attentive salesman

Aircoach is fab. I'm lucky I'm on the Leopardstown route so they go all through the night. Got on at 2am last night and lovely dri...

Spoke with Gary (Belfast) Customer Services & gave me great advice if my plane is delayed, I can use the next Coach if room available. A...

Comfortable bus, helpful and nice bus driver; Took advantage of the ride to the airport to enjoy once more the view of Dublin City.

The driver are always good👍

I have used Aircoach several times over the last few years and I found them to be excellent. On my last trip I came down with food poisoning...

Martin with Aircoach was incredibly kind and professional in getting us to Dublin with my honey’s bout of food poisoning. It was unfor...

Martin, our driver was awesome after my honey ran into some food poisoning while on the bus. Needless to say, Martin was so kind and profess...

I used Aircoach on Saturday 18 June at 2 pm from Dublin Airport Terminal 1 My flight was delayed to after 12--and I was booked on the 11 ...

The coach was on time, with a friendly driver. It was excellent

Excellent service in every way.

Driver 1453 on route 700 extremely pleasant and helpful to everyone last evening on trip 0259. Such a pleasant experience. Thank you.

Book your seats today to take advantage of our great offers. Book Now